The fourth chapter of our 2011 season took place in Bromma on a very, very warm Saturday. It is the story of how we arrived at the pitch well prepared mentally, longing to play our first 15 a side game in over a month. When the starting whistle blew we were all on the pitch as one, united by our love for the game and each other. This feeling grew all through the game and no matter what happened we never lost the love.

The match was very even to begin with, we made breakthroughs that were stopped by Attila and they made breakthroughs that we stopped. What made the big difference in the end was our lack of ability to read the game, support each other properly and our sloppy rucking. We also made a lot of silly handling errors with the ball. Not that we didn’t try to do it the proper and match winning way, we simply haven’t got enough players with enough experience yet, but we all learned a lot from this game and I’m certain that we will get better for every game we play.

The scrums were uncontested due to our lack of props, so they offered a great learning opportunity for those of us learning our jobs in the scrum. The minute the ball was out our flankers flew out of the scrum like rockets and worked their magic, especially in defence. Our back line had more depth than before so they came at greater speed and created more dangerous opportunities than in previous games.

Our only try came in the second half and it was a true team try, everyone contributed in the fight to get the ball across Attila’s line and finally, Mia- Maria was the lucky one who firmly planted the ball on the ground.

This game is the story of seventeen players, a coach and an assistant coach who all deserve to be named individually.

Sofia Helbro who took on the role as number one. Despite not having played for quite a while she tackled hard as ever.

Kristina Petersson took on the role as hooker. Her line out throw ins were not bad considering it was the first time she did it.

Malin Forsberg played at number three. Her physical strenght is truly awesome, and you will remember your encounters with her on the pitch if she comes at you with speed.

Karolina Bengtsson made her début in this game. She played second row and we all look forward to follow her development on the pitch.

Gabriella Westerdahl was in the second row. When not scrummaging she was all over the pitch, in a good way.

Caroline Lindberg, one of the rocket like flankers,was, as usual, all over the pitch in a good way, putting her body on the line. How she survives the repeated physical abuse is a mystery to me.

Sandra Mabrouk was our other rocket flanker. Tackling people to the ground left, right and center.

Louise Ericsäter did her thing at number eight. Her experience as a player was a great help to us all.

Mia- Maria Nordlund, scrum half and try scorer. Her voice could be heard through the game and when nobody stood in her way she got the ball out of the rucks in a secure way.

Anna Thynell, our captain and fly half with a plan for the game and secure hands.

Lisa Hulthén as number eleven once more showed that pure determination can make a good substitute for experience. Her performance on the wing was fierce.

Theresia Bengtsson took on the role as inside centre with gusto. Her hand offs will hurt you!

Emmy Westerdahl was second centre. Hurting fingers won’t stop her and her speed will stun you.

Maria Alvarez, the experienced wing worked like mad and did a great job out on her side.

Martina Vivlund, trying out the role of full back. According to me she was born to play in this position.

Frida Nordlund, making a guest appearance as a sub for us on her holiday. It was great to see her on the pitch and watch what all her experience brought along despite it being a while since she last played.

Jorun Borggren, didn’t get to play in this game but without her carrying of the waterbottles we would have dehydrated.

Stefan Tunfors, our coach who encouraged us in the right way all through the game.

Kerstin Lövendahl, assistant coach while her broken hand bone heals, full of tips before and after the game.

This game is the story of how our love for the game and our ability to play as a unit came together. We truly gelled as a team and built a foundation for the forthcoming games. For eighty minutes we played rugby like our lives depended on it. Everyone played beyond or at the top of their personal best at least once during the game, at least it felt like that. For eighty minutes our love of the oval ball made us run, tackle, attack, defend and have fun together and we never lost our focus.For eighty minutes we truly had the heart of lionesses. 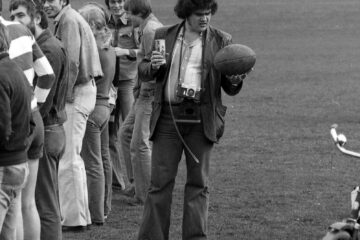