Rugby is a sport for everyone! Come along and join us for this years second try out session with our senior ladies and gents teams.

Where and When? We will be on the artificial grass pitch at Lerbäckskolan in Lund this Wednesday, the 22nd of January, from 18.30 to 19.30. Be there in good time and in case you cannot find it, please contact a team representative beforehand. You will find their contact information under http://lugirugby.com/contact/ . You can also contact us directly via facebook.

What to take with you? Most importantly your positive attitude. Otherwise, weather appropriate sport clothes and shoes and a water bottle. IMPORTANT: Unfortunately, there are no changing rooms close to the pitch, so make sure to change before.

After a welcoming speech from our chairman Hans Hallstadius, several prices were awarded during the evening:

A big thank you was given to the coaches of the teams , Ross Watson for the ladies team and Stuart Birch for the gents team, as well as Sean Rollings and Mattias Vendler for the kids.

The “Stefan Landgrens vandringspris” which is awarded for special engagement in the club was awarded to Sean Rollings and Marie Sassner. Sean Rollings has successfully developed and trained the kids section of the club. The kids won the danish championship this year and participated in several tournaments with success. Marie Sassner was honored for her work in the board as a secretary, making the organization of the club possible.

Last, but not least, Stefan Landgren was awarded the titel of honorary chairman. He was thanked for all the work and passion that he put into the club and still is putting in. He is an example to a lot of us and we are happy that he still remains active around the club.

Finally, the club wants to thank Martina Vivlund for making this dinner possible and everyone who is part of this club and helps to make things work behind and on the scenes.

We are looking forward to a great season 2020!

How do you become a social member? You have the possibility to join this and all other events at the clubhouse by becoming a social club member for 300 SEK a year . Read more about how to become a member under www.lugirugby.come/membership ! You need to be able to prove that you are a social member when joining the social events! 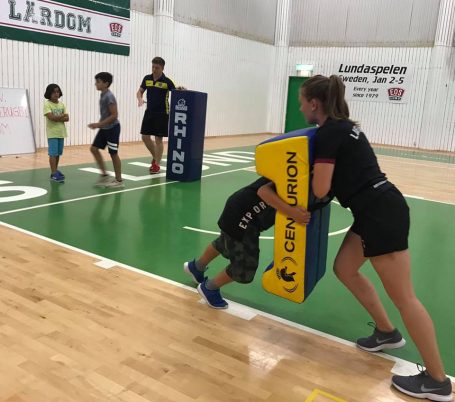 Our club participated in the sommar activities organized by ‘Lov i Lund’ in cooperation with Eos Cares last friday and the activity was a full success. Kids from 13 to 20 got to test touch rugby and a bit of tackling. If you were part of it and enjoyed yourself, you are always welcome to train with us. You can find all info about our trainings on our website: http://lugirugby.com/training/